The Man of Multiple Names Could Hear My Multiple Voices

To his wife Joyce, his co-workers and other friends he was “Bill”.  His mom, my grandma,  always referred to him as William Thomas (I always wondered who that “William Thomas” guy she kept talking about was).  But to me and my younger brother Lee (pictured above), he was Willie.  Not even “Uncle” Willie…just Willie.  It was what my mom and his other siblings called him, and he graciously allowed us to keep using that name for the rest of his life.  Willie was probably the person most responsible for developing my creative talents and imagination.

Don’t get me wrong.  Mom always read stories to me (shifting her voice with the characters), and she and Dad always made sure I had imaginative toys, books, records, crayons & paper,  and  (of course) plenty of cardboard boxes.  Dad had plans to go into drafting (before the government beat him to it and drafted him for a little assignment in 1940s Germany), so my drawing and cartooning abilities doubtless came from him.  Mom and Joyce both made puppets for me over the years and if they ever thought I was weird for doing the voices of my stuffed toys as I played, they never let on.  But it was Willie who actively joined in the play, and invited me to join in his own, right thru adulthood.

The Electric and the Eclectic

It was Willie who fostered my interest in things electronic.  He built me a crystal radio set and showed me how to string antennae wire all over grandma’s spare room and listen to voices and music over the headphones.  It was Willie who put me on the air for the very first time…even if it was just a quick “hello” over his custom-built ham radio set-up.

It was Willie who took me over to visit his friend Don Scales, who built hi-fi systems and had this funny contraption called a tape recorder.  He let us kids not only record our voices, but play around with tape echo effects.  And some years later it was Willie, through his connection with Don (also chief engineer at the home town radio station), who got me my first part time job as a radio announcer/dj  while I was still in high school.  It’s no false modesty when I say it was Willie’s doing  and not my own talents — I still have the original audition reel and it’s cringeworthy!

When I got a tape recorder of my own and started messing around with character voices and the sound effects I could pull off my cartoon kiddie records, Willie not only encouraged me, he wrote some silly “radio serial” scripts about the guys he worked with in the radio/tv repair shop at Sears – “The Adventures of Picture Tube Charlie”, and did some of the voices alongside mine.  I’m told the gang at work kept bugging him for new “episodes”.

While I never learned any electrical engineering, Willie did provide for the advancement of my on air style, creating a makeshift “portable consolette” for me out of old record players, a recycled cart machine, basic microphone and a small mixing board which he built himself.  I even used it at a few of my high school dances…the only time you’d find an un-datable square like me at such an event. 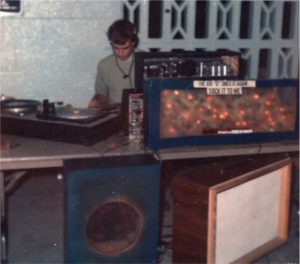 Willie , who worked as a TV Repair man at Sears, salvaged an old b&w tv from the shop and got it working so I could have it in my basement lair at home (another blog for another time).  That was the one I remember watching the first moon landing on.  During college, he repaired another set for my first apartment, and it was the first color tv in our immediate family.  Willie and Joyce had a big RCA color console at their house, of course, with sound that could be rigged through his custom stereo.  As kids, we were thrilled when a Saturday family gathering or a rare overnight stay gave us a treasured glimpse into this magical new world of color.  Promos for the upcoming week’s “Batman” almost gave me a sensory overload!  On more than a few Sunday nights, mom and dad grudgingly let our visit go into overtime so we could watch Walt Disney’s Wonderful World of Color before heading  home.

Still later, during the Betamax years, Willie could always be counted upon to faithfully watch the tapes  I’d bring home of a tv commercial or promo I’d directed or appeared in, or the few clips I was able to snag when my puppet characters and I appeared on the local kiddie show, “Time for Uncle Paul” (again…another blog for another time). 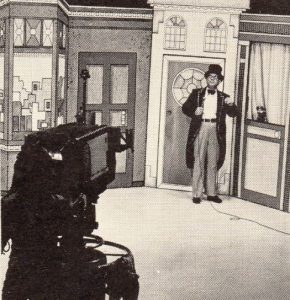 Even when the rest of the family wasn’t really that interested, Willie (and Joyce) served as my enthusiastic and encouraging audience.  And Joyce actually contributed one of the makeshift puppets I used on the show, Malcom, who was built from a teddy bear body and a ‘cookie monster’ style head that could “eat” cookies through a slot in the back of his mouth.  On the show, though, he quickly developed into a sweet, slow-witted soul not unlike Edgar Bergen‘s bumpkin, “Mortimer Snerd“.  The puppets couldn’t actually do much, physically.  But they really came alive as characters.

But Willie’s influence, and Joyce’s, didn’t stop at local radio and local tv.  It’s literally gone around the world thanks to all those years of creative nurturing.  More on that in the next post.