…or maybe I should entitle this one:  Returning to the Scene of the Crime.

Our local MCA-i chapter met at WRAL-TV recently to learn how the forward-thinking station has developed its website presence over the years, and what it’s doing to anticipate the internet’s impact on local television.

We were hosted in Studio A, which has seen uncounted telethons, record-hop and gospel shows, political discussions, quiz programs, the early days of Rick Flair and Andre the Giant…and the tv debut of a cocky young would-be puppeteer.

It was kind of eerie, seeing the corner of the studio where I spent so many mornings chatting with long-time kiddie show fixture (and a great jazz man…plus one of the best friends I ever had in my life), “Uncle” Paul Montgomery.   Only later did I realize the place I chose to sit for the presentation by our generous TV5 hosts…was the very spot where Paul had me tape our very first “bit”.  It was in a free-standing puppet box used for their then-regular character, Crawford the Lion.  I showed up with about the only puppet I owned:  a little skunk named Stripes, who had a head cold and couldn’t smell anything.  We did a five minute ad-lib segment (something no modern audience would tolerate, I realize, but hey – this was over 40 years ago!), and everything just clicked.  Years later, that little effort would evolve into my entry-level ticket to working as a “hired hand” for Jim Henson’s Muppets in two motion pictures which used the Wilmington, NC studios in the late 90s. 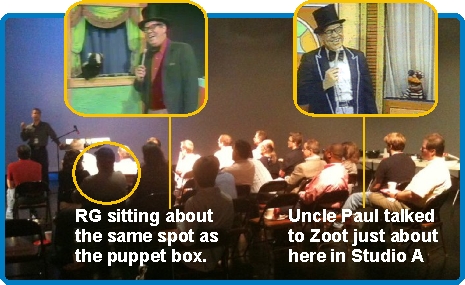 Fascinating as it was to see what’s been done to the station in the years since I was there (the news department was just phasing out 16mm film when I came in), I felt a little something extra while sitting in the audience.  After all, none of the speakers had been in this market when the likes of Zoot, Stripes, Malcomb, Woody, Blorg, and J. Bennington Bunny were regular fixtures with Uncle Paul in Studio A.  Come to think of it…none of our gracious hosts had even been born!

…made me feel both ancient and forever young at the same time.