Okay, I’ve always suspected it.  That’s why I asked my webmaster/designer Lou Dalmaso to include those keywords in my website, voices2go.com.    And he must’ve done a great job with it.  Now Google confirms it!

I’m only just now getting some of my sleep-deprived grey matter working after a flight out to Portland, Oregon for the first-ever “Faffcon”.  It’s an “un-convention”, where like-minded professionals gather to share ideas and techniques without the usual lecture/audience structure.  Far more than just what we used to call Bull Sessions, there were many helpful one-hour mini-meetings where we all taught and shared.

I went primarily to learn more about self-marketing.  And Steve Cunningham’s hour on search engines and websites was a highlight for me.  There were many reasons:  not the least of which was the surprise of seeing him flash this image on the screen: 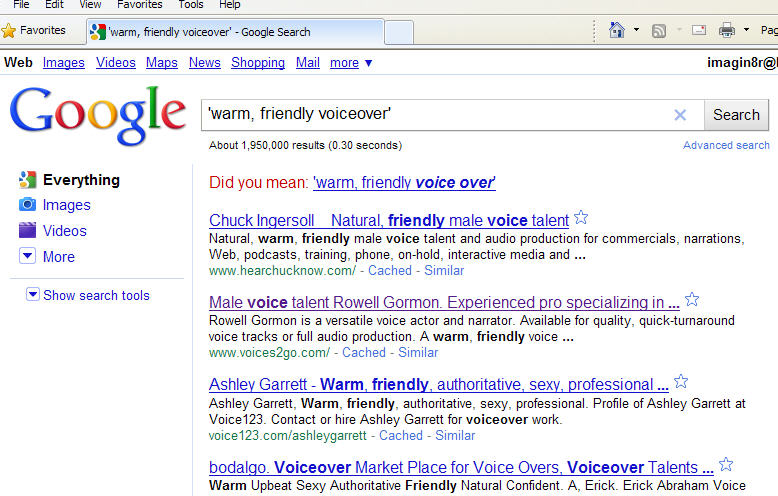 I’ll be taking Steve up on his generous invitation to call and find out how to further capitalize on what I must be doing right.  And there are other friends, new and established, I’ll now be able to add to my “who ya gonna call?” list for other things.  Who knows?  I may have wound up on one or two lists myself.

Faffcon takes its name from a British slang term for “goofing off”…faffing about.  But the activity of the past weekend with those of us now being called the Founding Faffers was anything but a waste of time!  And there will be more in the future.  You can find out about it at http://www.faffcon.com/

I heard about Doc’s death the same way I first heard from Doc himself…on the internet.

That didn’t make it any easier to know a good friend is gone. 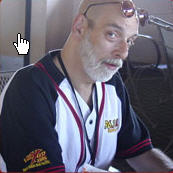 Doc Phillips worked in radio a long time, also making the transition to freelance voiceover talent and producer. He was still doing weekends on the air before his heart attack this week. With complications from his diabetes, it was evidently too much for his system to fight off.

Again, I only know this because of the internet.

Doc was one of the first people to say “hi” on the Voiceover Bulletin Board (vo-bb.com), which has become a second family to so many of us in the VO field. Some would say it actually ranks higher than that when you want the company of others who actually “get” what you do.

He was one of the first cheerleaders of my various attempts at new demos, encouraged me on starting this web log. And he was one of the first I traded correspondence with directly when he mentioned a promotional LP put out by TM Productions called “Tomorrow Radio”, which had some terrific (and prescient!) comedy treatment of what radio was turning into. Turns out I had a copy of the disc, and got a kick out of sending it to him as an mp3…again, via internet. It was kind of a thrill to link up with another soul who knew what a format-reference to “Punk Country” was all about!

I’d lost track of Doc this past year. When I’d click my link to his blog, I caught a few hints he was not in good health, but knew nothing more than that.

I do wish I’d gotten to know him better. I consider myself fortunate to have known him at all.

Friend Caryn Clark (the hip chick) commented on Facebook about leaving her usual home-studio setting for a session at another recording facility.  Her note of joy about the fact she wouldn’t have to “dress corporate” for the appointment reminded me of some early advice I got from an old agency pro.

Mike Silver was one of the founders of McKinney Silver (and at that time, Rockett), a major ad agency with headquarters in my town.  I knew him through my friend Paul Montgomery (see previous posts about “Uncle Paul”).  Mike was nearing the end of his career, and a life hit by cancer, but met with me to share what advice he could with a new freelance voice guy.

While we never worked together, he immediately put my mind at ease on  one point, which Caryn made me think of in her post today.

“Am I going to be expected to show up in jacket-and-tie, toting a briefcase?”, I remember asking him.

“Oh, no,” he chuckled.  “In fact, as a voice talent, you’d probably be viewed with suspicion if you did!  A certain ‘bohemian element’ is almost expected.”

I’ve taken full advantage of that every day since, and loved it.

If you’ve been at this sort of work any time at all, you’ve probably heard  those dreaded words: “How Can I Break Into Voiceovers?”

First, let me post a disclaimer.  I’m probably not qualified to answer this question anyway.  I didn’t really Break Into Voiceovers. I sort of sneaked in the side entrance. (*see previous post about my transition from radio, and years in a basement playing with tape recorders. rg)

But think about it.  Isn’t that what you’d rather do anyway?

I mean, consider the  burglar.

He (or she), by “breaking in”, is obviously in a place he doesn’t belong.  He really won’t benefit from any sort of attention…nor, if he’s a smart burglar, will he want to keep coming back to the same place to do his thing.  There’ll be too great a risk of being “found out”!

Mind you, I’m not trying to paint new talent as interlopers, looking to “steal” work that was meant only for established Voice Actors.  That’s another rant for another writer.

No, my point is simply this.  In my experience, it’s been better not to “Break In”…but to “BE”…to just sort of “Appear”.  We show up in the places a VoiceOver Artist is expected to be.  We already know enough to blend in…we appear to be just what we’re supposed to be.  In fact, we give every impression we’ve always been there.  We’ve learned how to interact…gain confidence…make contacts.  And if we do our job right, eventually, we can return again and again to the “scene of the crime”.   …by invitation!

Besides, which is better: being noticed as a “Burglar”- found out in a place you don’t belong? …or being noticed as someone who’s precisely where he/she should be, and able to “Deliver The Goods”?  (Burglars, by their very nature, never Deliver.)

So while I appreciate the enthusiasm, directness, and thirst for learning which many new or aspiring Voice Talent display…I think the question might need to be re-thought.

“Breaking In” is probably the least helpful thing you can do.

For the beginning of National VoiceOver Appreciation Month (see website for details), I offer the following fantasy.

Does the fact that VoiceOver artists are getting our own month mean we get to tell our “voice seekers” what style of Director we’d like to hear in the talkback?

I mean, can we specify up front: “I’d like to hear your direction with a sort of a Martin Scorsese feel.” …or… “Think Steven Spielberg.” …or maybe… “What I have in mind is sort of an Ingmar Bergman…but make it warm and casual.”

Well why not? Seems like we’re increasingly being told to be Gene Hackman…or Jeff Bridges…or (for the ladies) Susan Sarandon…or (possibly for both genders) Morgan Freeman. And all the while our voice coaches continually prod us to find our own “signature sound” and stay with that!

In fairness, I should say I have been completely entertained and impressed by all the aforementioned actors at some point. It just gets tedious after awhile having their names flung about as verbal shorthand in casting direction…which more often than not has nothing to do with what the final production will actually sound like…whether you get the part or not. 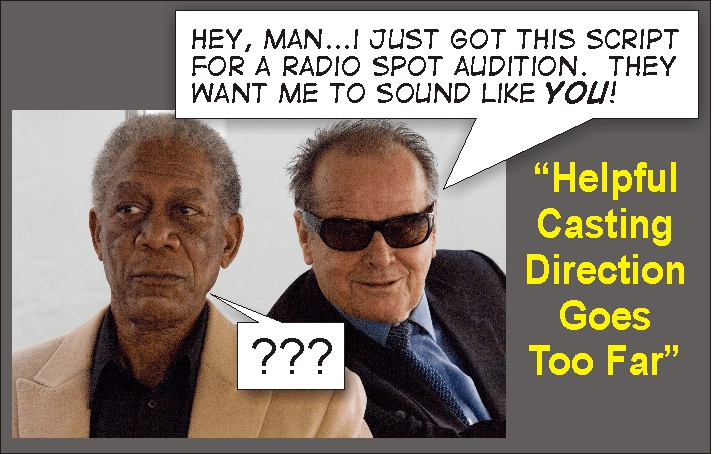 (Sigh) But, also in fairness, I do have to admit it’s not always a case of a director simply trying to cast a project using the memory of what he saw on HBO last night.

Sometimes it can actually be helpful.

There was that one job which started out with me being told the client liked my demo, but wanted to hear me do the script like Robert Duvall. …even sent me a link to Duvall’s voice demo.

Now if you know me, or you’ve listened to the demos on my home page www.voices2go.com you’ll realize I’d never be mistaken for Robert Duvall! Still, my contact convinced me to have a go at the script, which I read in a sort of world-weary delivery with a touch of authority.

I got the job. …and two more after that for the same client using the same voice (disney i.d.e.a.s for a project they created for the U.S. Navy).

So, okay, maybe I’m being too hard on the Voice Seekers during National VoiceOver Appreciation Month.

But I’m also starting to delete auditon notices that should have gone to Morgan Freeman.