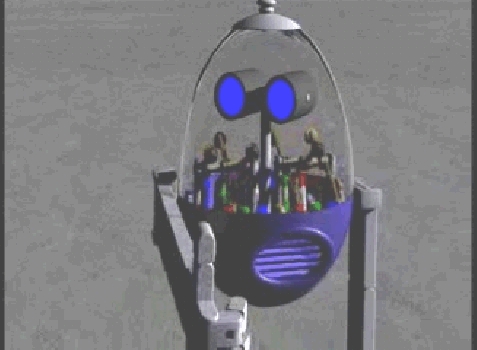 tle robot for a NASA animation video detailing  U.S. astronauts’ return to the moon.  The project was very clever and a lot of fun.  And of course it was also immediately redundant once funding for any further moon missions was scrapped recently.

Mind you, the client paid for my work…no complaints there.  But it would have been fun to see the finished piece.

Well, I may yet have the chance.

This week I got a request to get in the ISDN booth and “re-boot”.  The agency had re-worked the original concept, salvaging a lot of what had previously been done.  They’re now repurposing the animation project to show kids what it will take to live “off-world”…on a space station, on Mars, or even the surface of an asteroid.

I can’t remember having a cancelled project reborn like this.  And it was very gratifying to be called upon to re-create the character for the new, streamlined project (and yes, they said I “sounded alike”…just like my previous post!).  This is definitely one “new and improved” product I won’t be complaining about!

Uhm…did I just write about machines needing to be seen and not heard?  I suppose I could make an exception.

Normally, I’m on the side of anything that provides a paycheck to a voice talent.  But I have to say I have a lot of sympathy with Craig Wilson, writing in USA Today about some bossy automated devices he’s had to deal with lately.

I particularly empathize with him over his reaction to the lady who lives in the GPS.  Though I don’t own one, I was driving our It’s A Mystery troupe to a show last year, and I swear the GPS we had was trying to kill us.  She kept giving us commands to turn where there was no road.  After I began ignoring the prompts on our return trip, I fully expected to hear the little voice utter a frustrated:  “Humph……Men!!!”

Apologies to any and all who earn their bread with these gigs.  I’ve done one or two myself.  I guess I was surprised to notice someone else who noticed.

Gracie Allen was the wife and comic partner of comedian George Burns.  Hiding behind a  “ditzy” character, she often got in some really wonderful zingers during their routines (Gracie was a very intelligent woman, by the way).

In one great bit from a Radio show in my collection, George feeds her the straight line for a joke.  She comes back with something totally unrelated.

“No, that’s the right answer,” Gracie replies blithely, “you asked the wrong question.”

I’ve been blessed during my career with trusted friends who’ve given me the right answer, regardless of how I worded the question.  And fortunately over time, I’ve become better able to understand, accept, and utilize the words I’ve received.

I can count among my friends in the voiceover business a number of people whose approval I covet…but whose honest answers I respect.  That’s come into play a lot this year as I’ve gone through the long and sometimes frustrating process of re-tooling my online image, my demos, and even my business card (you all know who you are).

I don’t always get the answer I wanted or expected.  But more often than not it’s the response I need.

I’d known about it since last fall, bought it for myself as a Christmas present, only in late Spring got a chance to listen through most of it un-interrupted, and just this past week finished the audio epic on the drive to an otherwise wasted on-camera audition.

I refer to the audio version of “The Screwtape Letters”, by C.S. Lewis.  It was produced in 2009 for Focus On The Family, an organization I would not usually associate with anything approaching Radio Drama or other creative audio production.  But whoever was in charge let the producers “go for it”…and the result is captivating on multiple levels.

Much of that magic is due to the casting of Andy Serkis (“Gollum” in Lord of the Rings, and other wonderful acting turns).  But you won’t hear the simpering little ex-Hobbit in this vocal creation.  Serkis captures the full range of the title character – a cynical, sophisticated denizen of the bureaucracy of Hell who oozes charm when it suits, flings withering sarcasm when he desires, and unleashes the rage of a wild thing when he’s crossed.

The promotional video below dwells on more than the performance, and uses more “over-the-top” moments than the subtleties the full production offers.  But it might convince you to give a listen…regardless of your beliefs…just for the audio experience!

Be warned…the volume level may need lowering before you start the video.  Otherwise you may scare yourself, your co-workers, or any sleeping dog or cat nearby.

I’ve been told there’s a good audiobook version of “Screwtape” read by John Cleese and I’m going to seek it out.  But as much a fan as I am of the “ex-Python”, I can’t imagine him being as frightening as the Screwtape I’ve just escaped the company of.

Many of you reading this are very fine voice actors.  I like to think of myself that way too.  But how “very fine” would you be, if you had to play a whole scene wherein your character was only able to utter variations on one word?

I’m not even sure I could do it.  But Simon’s Cat can.  Actually, Simon is the voice of the Cat he created in a surprise hit series of internet videos, which I’m ashamed to say I only became aware of this year.  If you have a cat, or have ever been around cats, these short features should have you laughing so hard you’ll have to stop the playback and wipe your eyes so you can see what happens next.

And talented as animator Simon Tofield is with his pen, he’s equally talented with creating a fully realized character…with only the variations on a single sound.

While there are only a precious handful of these animated gems available to date, Simon’s Cat has also been successfully translated into print with a book of the same name.  Even without the voicetrack, you’ll still be laughing yourself silly.  I recommend it to your attention.

As promised, a postscript  about that audio tour of The Breakers, where I’m the Voice of the Vanderbilt Summer Home in Newport.

It was treat enough to be chosen as having just the sound the clients were “listening” for in the initial recorded audition.  But it was an even bigger compliment on the job itself, hearing the group and their engineer going through the sections I’d auditioned with, saying “Oh, we don’t need to do those over, they’re already perfect.”

Adding “icing” to the voiceover cake, however, was a pickup session a few weeks later for some last-minute script changes.  It was mercifully quick , since my air conditioning was out that day.  But after everything was recorded and checked, both engineer and client commented they’d expected it to take longer, since they were accustomed to voice talent not being able to match themselves in previous recordings.

I was taken off guard by that one.  I just thought everybody could match themselves, barring technical problems or illness.

Not so, I was assured.  So I gratefully accepted the compliment and the enlightenment!  Knowing we had time, I told them it reminded me of that great Marx Bros routine from Animal Crackers, where Groucho (Capt. Spaulding) approaches musician Chico (Emanuel Ravelli).

Groucho: Say, I used to know a fellow, looked exactly like you, by the name of…ah…Emanuel Ravelli. Are you his brother?

Groucho: Well, no wonder you look like him…But I still insist, there is a resemblance.

Of course, I rattled it off in my semi-reasonable-facsimile Groucho voice and my fairly-spot-on Chico, then offered an alternate punchline to match our own completed session:  “Hey, they think I sound alike!”

Maybe, if they ever do an audio tour of Margaret Dumont/Mrs. Rittenhouse’s mansion, I’ll get that job too!

TheBreakersFamilyTour_short
I ain’t no “brick…house”.  I’m more the Indiana Limestone type, but it turns out I am “mighty mighty”!

I’m the “Voice” of the Vanderbilt Summer Mansion in Newport, Rhode Island, named “The Breakers”.  Not some ghost, mind you.  I am the House!  And in a special audio tour aimed at families, I’ll be showing you around the Best House In Town.  Forget those laughable images of me on my video page…here’s what I really look like! 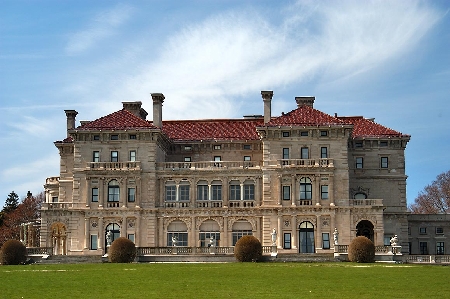 There’s more…lots more…on a neat new website, and they even have another page with a clip from the audio tour, where I (as the House) introduce “Monsieur Le Chef”, played by another actor.

(If you’re in a hurry, you can hear a condensed version of the clip here.)

It’s a pity I couldn’t have recorded on location.  But my trusty imagination worked its magic to the point that my director and his happy clients commented several times it seemed I had actually been there and could really see what I was describing.  And there was another neat compliment they gave me, which will be the subject of a future post.

Meanwhile, if you’re in New England anytime soon…come out for a visit, and I’ll introduce you to the Chef, the Butler, the Dolphin in the Fountain, the Fabulous Breakinis…even take you through some of the secret passages!

It’ll be grand to show you around!