Finally putting some videos on my refurbished voices2go.com website (see lengthy post below), I also wanted to include some of my old Betamax video from my three years with Paul Montgomery‘s tv show.  I started way too late at night, and had to settle for re-editing segments of some local tributes to Paul which borrowed from my original tapes, since almost none of Paul’s 20 year run was preserved by the station. 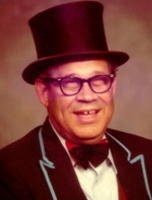 In what has to be proof-positive there is indeed a Grinch, Paul was taken from us on Christmas Eve 2002.  I’ve been denying he’s been gone ever since.  So going over those old video images and hearing that big laugh of his was like a long-overdue visit with a great friend.

I’ve resolved to eventually replace the current video composite with something of my own,using the same clips and more, with a bit more personal narration.  But not tonight.  Why not?  Because it’s now morning, and I’ve got to resist the temptation to get out the audio recordings of Paul’s “Jazz Journeymen” trio I was also priviledged to preserve.  So for now, the hodgepodge will have to do.  (It’s on the Video page of the website.  Just scroll down till you see the link picturing Paul and Zoot.)

Sometimes spending a night with “ghosts” (Paul and a 1977-version of me) can be downright comforting.