You know the old gripe, “No good deed goes unpunished”?  How refreshing it is to discover that isn’t always the case!

In a previous post on the neat people you meet in the ISDN booth, I mentioned a new friend named David DeVries, currently touring in “Wicked”, as the redoubtable Dr. Dillamond.   David’s touching portrayal of the last Talking Animal allowed to teach in Oz was one of my daughter’s favorite characters, and instantly became one of mine too.

In addition to being a wonderful stage performer, it turns out David is no slouch behind the mic either.  And after discovering other things we had in common (we’ve both performed in the wacky comedy, “Greater Tuna”) we became instant friends.

Oh, and the “good deed” bit?  Well, at the second of his visits to use my ISDN booth for a remote client, I asked his advice on a seating chart for buying tickets.  I had decided to see “Wicked”, partly as a birthday present to myself.  He did better than that…helping me purchase tickets in the “house” section, which made my funds go farther while putting me in closer.

We arrived at the theatre on the appointed night.  I hadn’t even checked on the tickets or their price in the meantime.  Turns out the “house seats” were significantly below the cost of what I’d been prepared for…and we were in the Orchestra Section, 7th Row Center!  I had snagged an extra ticket for my daughter, and the glow on her face as the ushers kept waving us closer and closer to the stage was worth the whole thing. 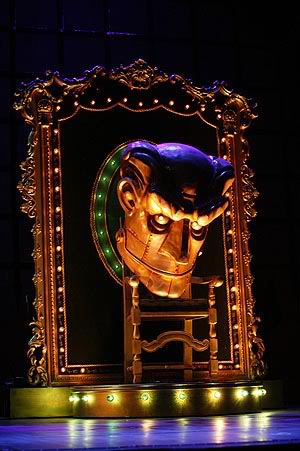 Piling favor upon favor, David had also offered us a backstage tour after the show.   Seeing their self-contained stage-within-a-stage and everything it took to create the magic was almost as enthrallling as the musical itself.  I knew better than to ask to take pictures, but I would have LOVED to show you myself standing next to the imposing head of Oz himself.

Oh, and the show was fabulous, too.  If it comes anywhere near you…by all means, see it!

As you may have guessed, by the time “Wicked” and David were ready to move on…I found it very easy to tell him to forget about the fee we’d discussed for using my equipment.

I still think I got the better of the bargain.  …not only the most exciting time I’ve ever had with live theatre…but the unexpected gift of friendship that began with trying to help out a fellow Voice Actor.

I recommend it to your attention.  Your mileage may vary.

Cheers from this official “Additional Muppeteer” to The Muppets for their win in the Webby Awards.  If you haven’t seen their hilarious version of “Bohemian Rhapsody“, treat yourself.

Although voting is over, this great video featuring Animal works just as well as a celebration as it did a call for voting!

Who among us isn’t always looking out for a bargain…trying to be sure we pay the lowest price?

Clients and companies who want you to do what you do at bargain prices are nothing new.  But friend and fellow SaVoa member, attorney Robert Sciglimpaglia, forcefully fingers a recent so-called “pay to play” operation for what it is…using the language of their own contract!

It reads like a sick piece of satire, but it’s absolutely for real.  And whether you’re union or non-union, veteran or newbie or “wannabe”, you need to know about this.  It’s the mindset you’re going to be dealing with at some future point in your quest for the next Big Job…whether from these people, or others like them.

The piece has been posted several places on the web.  Read it on VoiceoverExtra here:  http://voiceoverxtra.com/article.htm?id=4r9qn51f

*Disclaimer:  The image from the tee shirt design available through the link credit does not have the four-letter word X’d out.  That was my addition for anyone reading the  clogged blog who might take offense.   rg