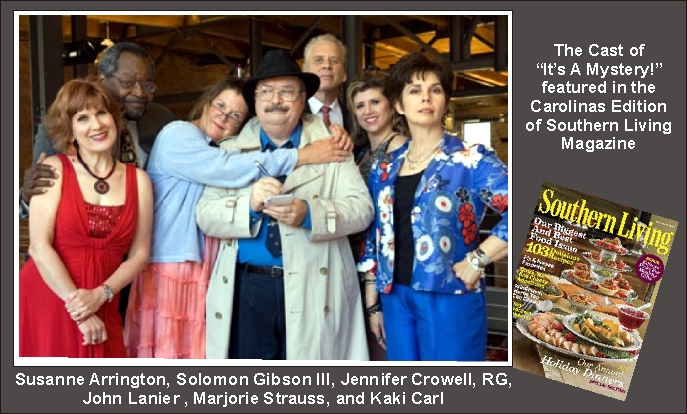 But by night…Ah! Cloaked in one of many ingenious disguises (although they all seem to be variations on an overweight old man)…the Nemesis of evildoers and murder most foul!

Okay. My secret identity has been blown…exposed in a three-page spread in Southern Living Magazine which profiles “It’s A Mystery!”, a comedy/mystery ensemble I’ve performed with over the past 13 years. We’ve done shows for corporate events and public venues, for audiences as diverse as GlaxoSmithKline, Pinehurst, even the FBI.

And since the group was officially formed by boss-lady and fellow Voice Talent Marjorie Strauss, I’ve been the detective for the majority of our shows (we have eight, some storylines bring in additional talented actors).

It’s part scripted, part adlibbed, with as much audience participation as we can muster…which is what keeps the experience fresh when we’re doing the same programs over and over. Though only a few of the cast are actually musicians, we play together like a fine jazz combo.

The characters are pure stereotype. Living cartoons, some of them. That helps us wring laughs out of an otherwise grim premise. And it gives us not only a license to “kill”, but to assume different voices which match each new outlandish persona.

Mine range from the typical jaded guy in a trenchcoat and fedora, to a lovable-but-clueless good ol’ boy who has a part time security service located “just east of Resume Speed on Route Four”. And, of course, each would-be detective has his own sound. My only limitation is finding one that fits both the character and how I appear in person. No hiding behind the microphone in this case, which is a challenge, but still fun.

Why do I always play the detective in the story? Why, when there are so many other rich characters and caricatures available in each new scenario?

One: unlike almost any other actor I know, I hate “dying”. Tried it. Don’t like it. Won’t do it. I also tend to like being a sympathetic character…which many of our “victims” decidedly are not.

Two: (and most telling) as the detective, I always use a notebook, pretending to jot down clues as the plot unfolds…which makes it perfectly natural to have the entire scripted portion of the show in my hot little hands at all times! Not only am I able to be a prompter for the rest of the cast (though they rarely need it), I haven’t had to memorize a show in over thirteen years! Now tell me that’s not the mark of a true Radio Actor!

Anyway, if you’re unable to track down a copy of the November 2008 Southern Living (and we’re only in the bonus section of the North Carolina/South Carolina Edition), you can uncover more of the secrets of “It’s A Mystery” at their website: www.itsamysterync.com.

Oh, and in case you should find yourself part of our audience in the future…here’s a hint: the Detective never does it…and it’s never Colonel Mustard in the Library with the Candlestick!