Nobody who knows me at all would likely cite me as an example of a “Happy” person, although I have been known to appear “deliriously content” from time to time. And I’ve always been suspicious of those who blithely declare people like me are only unhappy because we “choose” to be.

But I was impressed with some of the thoughts of writer Roger Fransecky which showed up in the Huffington Post under what I took to be an almost taunting headline, “Happiness is a Choice”.

You can read the whole thing here.

Although the post sometimes rambles a bit, I did find a few gems I could at least choose to consider…even if I balk at the idea of simply choosing to be Happy.

…fear bind(s) us, edits our hopes and diminishes our potential for happiness.
Dan Baker’s book, What Happy People Know…notes that a major barrier to happiness is fear. He writes, “We all have a neurological fear system embedded deep within our brains, a neural network that once helped us survive as a species, but now limits our lives. The biological circuitry of fear is the greatest enemy of happiness.”

To his credit, Fransecky follows the admonishment to face and defeat our fears with a:

And that’s when I really started paying attention.

He offers a few ideas:
Love yourself enough to create a life you will love living. Entertainment legend George Burns, whose own sense of purpose helped him live to 100, offered this wise advice: “Everyday, do something you love.”
He provides a beginner’s checklist.
Ask yourself:
• What brings vitality to my life? When do I feel most alive?
• What is my proudest achievement?
• What is my greatest gift? My legacy?
• For what are you most grateful?
Near the end of the piece, Fransecky touches on something many of us overlook, sometimes because of misguided modesty or a reluctance to claim the genuine good stuff in our own experience:
Happiness can become your default state and not some elaborate life lie by acknowledging your gifts, your lessons, the people in your “cast” who love and teach, tolerate and celebrate you.
My favorite phrase refers to the danger of happiness being “some eleaborate life lie”. I mean, if you have to work that hard at being phony, what’s the point? What I like about his effort is the idea of steering your concentration more toward your own genuine attributes with the hope and expectation that it’ll become a habit over time. And there’s that bit about taking time to notice the people in your “cast”. Even those of us living a solitary life as a voice talent tucked away in a home studio have some such group, even if it’s often not there in person day-to-day.

It also helps that he’s not presenting these as some magical incantation that will float you to the top of the mountain…more like some practical hand-holds you can use to help you get a grip on your way up.

Hmm…that’s a choice I think I could make.

People who encourage other people to write a blog claim it can be therapeutic. Normally, I haven’t treated this space as such…at least, not primarily.

Maybe that changes with this post. It’s not funny and it has only a little to do with voiceovers, so if you’re looking for a laugh, you might want to skip this one.

I had gotten to the end of a full day, most of it productive, but a full one nonetheless. Several different sessions recording voicetracks with other talent, two very welcome last-minute commercials of my own via ISDN. With that last one, I was at the right place at the right time (actually, it wasn’t just luck… I was one of two voices being considered when the availability inquiry first came in, so at least someone liked my demo enough to put me on the short shortlist).

That offset some considerable frustration, knowing as soon as the session was finished, I’d have to make a hurried cross-town drive to deliver a replacement CD for a job I had, frankly, botched a week earlier. The client was gracious about it, even before I offered his next session free of charge to make amends. It was just five minutes to closing at the office when I delivered the goods and finally decided I could take time for breakfast/lunch/dinner…whatever. I hadn’t stopped for any meals all day, and I had more editing to do when I got home. Several auditions would have to be blown off for lack of time.

Driving back across town, nothing sufficiently appetizing presented itself. But before long, I remembered a cafeteria the family always has to bypass because it doesn’t have anything my young son will eat. Destination finally selected, I headed down the highway.

For whatever reason…maybe I was pre-occupied with the events of the day…I missed my exit, and had to go to the next one a mile or so down the road in order to turn around. As I veered up the ramp I remember thinking, “Man, I could have been sitting down to dinner by now.”

Coming down the curve of the opposite ramp I rounded the grassy embankment and was startled to see…a stalled line of vehicles!

That’s when I saw the guy sprawled on the pavement in the middle lane.

Several cars and trucks were forming a barrier behind him. Several drivers were already gathered around, looking for a way to help. A guy in the big white pickup truck ahead of me was honking his horn, irritated that the person in the little car ahead of him was holding up our impromptu caravan.

There was obviously nothing anyone could do until emergency vehicles arrived. In fact, I had no idea how bad things really were…no blood, no body parts, not even a set of skid marks. Just the form visible on the pavement, his legs pointing back toward us out of the crowd of would-be rescuers…legs clad in blue jeans and ending in black boots, spread in an uncomfortably, unnaturally wide “V”.

My “…Just what I need!” moment had instantly evaporated. I couldn’t even put the words together right as I heard myself try to mumble, “Well I guess someone has more pressing troubles than me…”.

Within a few more minutes, one of the volunteers was able to wave our little parade around the scene, and for the first time I noticed at least half a dozen vehicles…and two motorcycles…on either side of the three lanes. One car had its front smashed in, evidently from hitting the median wall. One of the bikes was on its side, its headlight sending a tuncated beam into the grassy embankment where it had evidently slid after losing its rider.

We hadn’t started moving a moment too soon. The impatient driver in the pickup ahead of me had been trying to wiggle out of line and around his nemesis blocking the open shoulder…horn blaring every few seconds. He obviously had more important places to be.

And me? Well, I finally got my well-deserved breakfast/lunch/dinner…whatever. But I dined very much pre-occupied with the image of those would-be helpers, huddled around the figure I had only seen as two impossibly spread, blue-jean clad legs. “At least, ” I thought, “I can have my delayed meal without needing a tube.” And later there were thoughts of how many weeks of pain the rider would endure before being able to have a meal such as I was enjoying.

Also in my head was the internal heckler: “…and YOU’VE had a bad day? Poor baby!”

At home now. Several hours past. Checking the local news station on the internet for anything about what I saw. Finally, after the 10pm hour was the briefest of reports.

I had been looking at a dead man.

Some poor guy had mis-merged his motorcycle just a minute or two before I showed up on that entrance ramp…and collided with one or more oncoming vehicles at full speed. He was my opposite number…definitely not at the right place at the right time, like me.

Not that it’s “all about me”. It’s just that mine is the only vantage point I can speak from at the moment. But I’m a bit ashamed at my lack of patience with the world…that so often I do make it “all about me”, and get very irritated when something happens that is just not “what I need.”

Five hours after the accident (as i edit this) two of the three highway lanes are only now re-opening at that entrance ramp where I had been waved through. And I’m sure that, repeatedly, as driver after driver approached the slowdown area there were the spoken or unspoken gripes from poor, inconvenienced souls:

In one of my earliest posts I teased with a tagline that I’d do the next one on “meeting Mel Blanc”.  If I had given it proper thought, I would not have made such a promise until after I’d devoted time to actually writing the piece, and for anyone disappointed by the long wait, I apologize.

But seeing as how yesterday was the anniversary of the Great Man’s passing in 1989, it seemed only reasonable and fitting to acknowledge the genuine connection he tried to make with fans he encountered.  It’ll have to be a sample, though.  If I wait till I remember everything, we’ll be looking at another anniversary of the day.

I got to spend a couple of hours with Mel Blanc during a reception after one of his college lectures, and can attest that he really did make himself accessible to the fans.  I’m sure there wasn’t one question he hadn’t heard a million times already, but he always answered graciously.

Mel kept two different sizes of publicity photos with him for people who’d ask for an autograph.  One was envelope-sized which fit in his coat pocket, and there was an 8 x 10 version he carried in his briefcase.  They were “padded”, like a memo pad, so he could sign one, peel it off, and hand it to the adoring fan.  At one point he said, “People are always asking me ‘Doncha get tired of people always asking for autographs?’ and I say ‘Hell no. If they ever stop asking that means I’m washed up!”

…and yes, I snagged one of the larger photos.  It occupies a prominent place near my work area with the personalized version of Mel’s standard autograph:  “Eh, What’s Up, Rowell?” 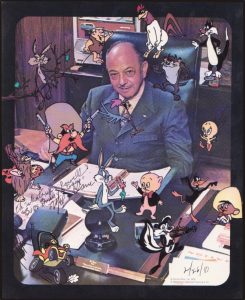 What America Means To Me….the freedom to get away with doing stuff like this!