I doubt I’ll ever need a job-search website which only specializes in $100,000 a year minimum salaries…but this spot created for a company called “the Ladders” absolutely captured my attention the first time I saw it.  And it sums up the way I feel about the voiceover business in its current state.  (I hope the link isn’t pulled before you can see this!)

Watch the spot, and just subsitute a person with a microphone for anyone holding a tennis racquet. 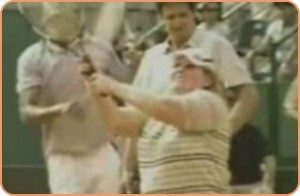 That little :30 tv commercial completely reflects my feelings about the de-volution of the performing arts in general…from writing, to radio, to television, to music.  The day some genius discovered you could create radio profits much, much cheaper by just opening the phone lines and making the audience provide the material was the day Radio (at least the Radio I cared anything about) died.  Television and other media have, in my opinion, likewise suffered.   The longer it continues, the more the audience feels absolutely entitled to “be the star”.  This commercial puts a perfect visual on that phenomenon for me.

To be on the air, behind a mic, in front of the camera, or celebrated in print…there was once a certain level of ability, talent, experience, even (dare I say it) class and style expected.  Otherwise the efforts were derided as substandard, like jokes about the National Enquirer, or the “Goat Gland” broadcast mavens of the 20s, or “Ted Mack’s Original Amateur Hour”…now known as “American Idol”.   Now, anyone with a computer and the price of an internet connection can level the playing field…and that’s not always necessarily a good thing.

[Perhaps it’s a bit disingenuous for me to write such things, here at my keyboard, posting it on the internet…but I doubt my own humble blog is taking eyes away from professional, established writers.]

What can professionals do about the invasion of our “playing field”?  Probably not very much.  But at the very least, we can still keep putting out quality work and pointing out the difference…even to an audience that’s so busy copying us (badly) that they may not get the message.